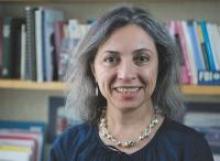 Shahrzad Mojab is Professor of Adult Education and Counseling, University of Toronto. Professor Mojab’s academic areas of expertise include educational policy studies; comparative and international adult education policy; adult education, globalization and learning; critical and feminist pedagogy. Her areas of research and teaching are: women, state, globalization and citizenship; women, war, militarization, violence and learning; and comparative analyses of lifelong learning theory and practice; and feminism, colonialism and imperialism. She has conducted extensive research on immigrant women’s access to employment and training in Canada and the impact of war and violence on women’s learning in the diaspora, in particular, on women political prisoners of the Middle East.

Professor Mojab’s lecture discussed the intimate relationship between contemporary forms of imperialism and democratic projects. She noted: “Following the 2003 occupation of Iraq, the United States launched a comprehensive ‘democracy’ training program, targeting women in particular. This was part of the project of ‘regime change’ and the implanting of a pro- American polity and civil society. My research, along with the emerging literature on the practices of NGOs in ‘post-war reconstruction’, paints a complex picture of the relationship between imperialism, capitalism, colonialism and feminism. This paper will argue that the existing body of literature on women’s NGOs and education does not identify the encroachment of international organizations and state actors through various training activities as a manifestation of the convergence of imperialism and colonial feminism.

The empirical evidence for this paper is based on extensive fieldwork in the Kurdish region of Northern Iraq in 2005 as well as a survey of the existing critical feminist literature on women’s NGOs, war, militarization, ‘post-war’ reconstruction and women’s learning. In this paper, I will follow the ideology, policy, and practices of gender-based funding packages; a process that I have called ‘tracing dollars.’ My objective is to map out in detail the actual mechanisms through which ‘colonial feminist’ dependency is being created under the condition of imperialism and occupation. To achieve this, I will provide a detailed mapping of major US- based donors to women’s NGOs in the Kurdish region of Iraq.”

Tags:
Gender and Sexuality, Near East