The Initiative on Race Gender and Globalization at Yale (IRGG) was established at the beginning of the academic year 2004-2005 with the support of the Office of the Provost.

The primary goals of the IRGG are to internationalize the undergraduate and graduate curricula and to open scholarly spaces for intellectual and artistic exchange across national borders. For the past 3 years the IRGG has achieved these goals by organizing colloquia and conferences; inviting scholars and creative artists from a range of international and disciplinary backgrounds; supporting graduate research; and by creating collaborative links with departments and programs including African American Studies, American Studies, English, Environmental Studies, Latin American Studies, Music, Women’s, Gender, and Sexuality Studies, and History.

The theme of this year’s IRGG colloquia was “The Transnational Imaginary.” This theme enabled us to address issues concern- ing the intersectionality of race, sexuality, and gender; the psychic and material life of diasporicity and post-coloniality; slavery and its extant legacies; the politics of liberal reason; memory, mourning, and commerce; and metropolitan culture and politics in the new South Africa, among other important topics.

WHAT THE DEEJAY SAID

The IRGG opened its colloquia with Rinaldo Walcott, Associate Professor in the Department of Sociology and Equity Studies in Education, where he also holds the Canada Research Chair in Social Justice and Cultural Studies, at the University of Toronto. He is author of Black Like Who?: Writing Black Canada (Insomniac Press, 1997) and the editor of Rude: Contemporary Black Canadian Cultural Criticism (Insomniac Press, 2000). On January 31, 2007 Professor Walcott participated in a roundtable discussion about his scholarship and later in the day delivered a public lecture entitled that engaged the con- temporary African Diasporic relationships in the urban context of contemporary Toronto.

In the month of February we hosted two scholars. On February 23 we co- sponsored a public conversation (with Labyrinth books) in which Professors Michael Veal and William Henry engaged William Henry’s most recent publication, What the Deejay Said: A Critique from the Street. Prefaced by Paul Gilroy, this text studies Jamaican cultural politics in the second half of the twentieth century. Combining autobiographical reflection with the lyricism of the many pioneers who ‘chatted’ on Reggae Sound Systems, What the Deejay Said represents the first attempt by a Reggae Dancehall Deejay and scholar to grapple with the key role Jamaican culture played in shaping the black cultural politics of the 1970s and 1980s in the UK.

On February 28 we hosted Saidiya Hartman, Professor in the Department of English and Comparative Literature and in the Institute for Research on Women and Gender at Columbia University. Professor Hartman is author of numerous articles and books, including Scenes of Subjection: Terror, Slavery, and Self-Making in Nineteenth-Century America (Oxford UP, 1997) and her most recent book, Lose Your Mother: A Journey Along the Atlantic Slave Route (Farrar, Straus and Giroux, 2007). During her visit, Professor Hartman participated in a roundtable discussion about her work, and she also participated in a public discussion, moderated by Professor Carby, about her book Lose Your Mother at Labyrinth bookstore.

In the month of March the IRGG hosted Ranjanna Khanna, Associate Professor in the Department of English and in the Program in Literature and affiliate of Women’s Studies at Duke University. She is the author of Dark Continents: Psychoanalysis and Colonialism (Duke University Press, 2003) and has recently completed a book manuscript entitled Algeria Cuts: Women and Representation 1830 to the present (Forthcoming). Her current book manuscript in progress is called Asylum: The Concept and the Practice. On March 7 Professor Khanna participated in a roundtable discussion about her recent scholarship, and she also delivered a public lecture entitled “Asylum and its Indignities” which engaged the question of asylum in our contemporary world using psychoanalytic theoretical frameworks.

In the month of April the IRGG hosted two scholars, Sarah Nuttall and Achille Mbembe, for a two-week visit to the Yale campus. Sarah Nuttall, Associate Professor of Literary and Cultural Studies at the Wits Institute for Social and Economic Research, University of the Witwatersrand, Johannesburg, is editor and author of numerous publications. She is editor of Beautiful/Ugly: African and Diaspora Aesthetics (Duke UP, 2006). And, she is co-editor of Text, Theory, Space: Land, Literature and History in South Africa and Australia (Routledge, 1996); Negotiating the Past: The Making of Memory in South Africa (OUP, 1998); Senses of Culture: South African Culture Studies (OUP, 2000); Johannesburg: The Elusive Metropolis (Public Culture special Issue, October 2004); and author of a forthcoming volume of essays on South African Literatures. On April 18 she participated in a roundtable discussion on politics in contemporary South Africa, and she also delivered a public lecture entitled “A Politics of Entanglement: Being in Johannesburg” that examined questions concerning race, gender, and commodification in contemporary South Africa. 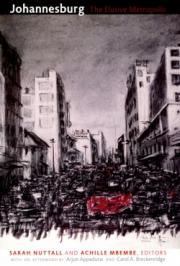 The IRGG closed the month of April and its colloquia with Achille Mbembe, Research Professor at the University of the Witwatersrand and Senior Researcher at the Wits Institute for Social and Economic Research. He has published widely on African history and politics. He is author of La naissance du maquis dans le Sud-Cameroun (Paris, Karthala, 1996); On the Postcolony (California UP, 2001); and he is co-editor of Johannesburg: The Elusive Metropolis (Public Culture special issue, October 2004). On April 25 he participated in a roundtable discussion about his work, and he also delivered a public lecture entitled “South Africa: the Transnational Nation?” which focused on questions concerning freedom and sovereignty in contemporary South Africa.