In the 2014-2015 academic year the IRGG continued to advance its mission, collaborating with other departments and institutions to facilitate conversations with scholars and artists that happen few other places on campus. 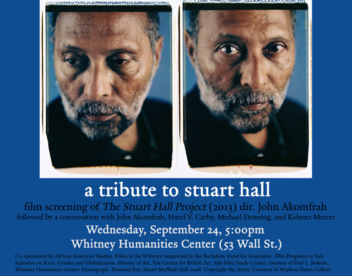 In September the IRGG welcomed noted filmmaker John Akomfrah who screened The Stuart Hall Project (2011). The screening was followed by a conversation about the work and legacy of the seminal Caribbean intellectual and cultural studies pioneer Stuart Hall, who passed away in February 2014. Professors Hazel V. Carby, Michael Denning, and Kobena Mercer joined Mr. Akomfrah in the discussion at the Whitney Humanities Center. The event was made possible through the generous co-sponsorship of African American Studies Department, Films at the Whitney, the Barbakow Fund for Innovative Film Programs at Yale, History of Art Department, Yale Center for British Art, Yale Film Study Center, courtesy of Paul L. Joskow, and the Whitney Humanities Center.

The IRGG in collaboration with the Department of African-American Studies, hosted Anna Arabindan-Kesson, Assistant Professor in Art and Archeology and African American Studies Princeton. 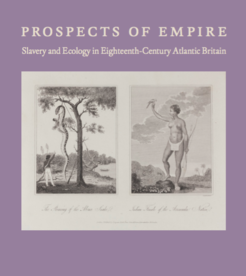 November also saw the opening of “Prospects of Empire: Slavery and Ecology in Eighteenth-Century Atlantic Britain” at the Lewis Walpole Library in Farmington, Connecticut. The exhibit, curated by PhD candidate Heather V. Vermeulen and Professor Hazel V. Carby, was part of a larger Yale initiative this fall exploring the visual representations of transatlantic slavery. The exhibit was broad in its scope, considering the relationship between the colonial management of land and labor in the long eighteenth century. In addition to exploring the visual culture of that moment, the exhibit also featured a selection of four lithographs from Joscelyn Gardner’s series Creole Portraits III: “bringing down the flowers” (2009-11), a recent joint acquisition by the Yale Center for British Art and the Yale University Art Gallery. Gardner’s work mines the eighteenth-century Jamaica archive of white English immigrant, overseer, slave-owner, and pen-keeper Thomas Thistlewood, one of whose diaries is on loan from the Beinecke.

Throughout the year the IRGG has been working with Yale ITS to significantly upgrade its website so that we can disseminate our events to the widest possible audience. The IRGG’s new Internet presence features an updated interface with extensive archives of events and conferences. In addition, videos of the 2013 “Sumak Kawsay” conference are available, a few in translation.  Please see: http://irgg.yale.edu/

In 2015-2016 the IRGG will continue to advance its mission of fostering important conversations about race, gender and the global political economy. On November 06 the IRGG will host a symposia about the pivotal HBO series The Wire (2002-2008). Events will accompany Professor Hazel Carby’s course on the series, “Urban Narratives of Injustice: On The Wire.” The course and talks will be newly relevant in light of recent events and increased attention to state surveillance, police violence, mass incarceration, and the American city – especially the American city of Baltimore, where events in The Wire take place.

This one-day symposium will examine the themes, style, and reception of The Wire (2002-2008), the landmark television drama that has become definitive of contemporary urban crisis. We will convene scholars from fields including: literary studies, philosophy, history, film and media studies, and political science and policy studies. The symposium will be organized around a number of central questions: How does reading The Wire illuminate the sources and experiences of urban decline: the political and moral economy of racial domination; the policy landscape and institutional environment of contemporary American cities; the modes of storytelling that make these issues legible?

In addition, more than a decade after its premiere, scholars are well-positioned to consider The Wire afresh, and from some distance: Its reception and “cult” status among both mass and academic audiences; its resonances with contemporary debates around urban and suburban state violence in the United States and abroad; the historical, political, and technological moment that it reflects and documents; and the shifts in strategies and technologies of police surveillance.

The IRGG thanks all of the administrators, IRGG Affiliates, Yale institutions, the Yale University Art Gallery, and the numerous individuals who were involved at every level of the growing and vital conversation about the links between race, gender, and globalization. We thank everyone and look forward to working and talking more in the years ahead.