In the 2015-2016 academic year the IRGG continued to advance its mission, working with other departments and institutions to facilitate conversations with scholars and artists that happen few other places on campus. 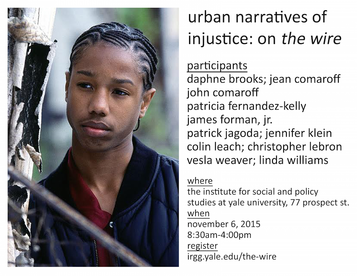 In November the IRGG collaborated with the African-American Studies Department and ISPS Center for the Study of Inequality (I-CSI) to a host “Urban Narratives of Injustice: On The Wire,” a symposium considering The Wire (2002-2008), critically acclaimed as the finest television drama ever made.

The symposium filled the auditorium of the Institution for Social and Policies Studies with students from all corners of campus; scholars from across the disciplines; and interested members of the New Haven community. It was held in conjunction with Professor Hazel Carby’s popular course of the same name.

The conversation could not have been timelier. Speakers examined the way that The Wire represents narratives of racial injustice; crime and the policing of citizens; urban decline and post-war political economy; technology and surveillance; the policy landscape and institutional environment of American cities; and policing and detection in the transnational context.

While The Wire has elicited significant critical and scholarly attention, this symposium offered the beginnings of a re-examination. More than a decade after the show’s premiere, the assembled speakers were well positioned to consider The Wire anew

and from some distance: its reception and “cult” status among both mass and academic audiences; its resonance with contemporary debates around urban and suburban state violence in the United States and abroad; the historical, political, and technological moment that it reflects and documents; and the shifts in strategies and technologies of police surveillance.

Moderation was provided by James Forman, Jr., Clinical Professor of Law at Yale Law School. The wide-ranging conversation covered issues from the moral critique of racial hierarchy, to its psychological heuristics, to the role of poverty and state welfare in the making of contemporary Baltimore.

The second panel brought together Linda Williams, Professor in Film & Media and Rhetoric, Emerita, at the University of California Berkeley; and Patrick Jagoda, Professor of English and New Media Studies at the University of Chicago. Professor Williams’ pathbreaking work on The Wire as “melodrama” has led the way for contemporary scholarly consideration of the series. Professor Jagoda brought to bear a theory of “network aesthetics” to understand the broader cultural, formal and political influences on the organization of the show and its narratives. Daphne Brooks, Professor of African American Studies and Theater Studies at Yale University, facilitated a conversation focused on both the aesthetics of the show and its reception among differently situated audiences.

Yale University, facilitated a conversation focused on both the aesthetics of the show and its reception among differently situated audiences.

The symposium provided fresh perspectives and a significant contribution to thinking about The Wire and the many issues it covers.

In January the IRGG collaborated with the Yale School of Art for its exhibition “Black Pulp!” The exhibition was curated by artists William Villalongo (Lecturer, YSA) and Mark Thomas Gibson (YSA MFA ‘13) at the Yale School of Art (32 Edgewood Ave. Gallery). It explored the creative use of printed media — small-run magazines, fiction novels, and comic books — and artwork to challenge racist narratives and change limited notions of black experience in America.

Artist Renee Cox offered the opening All School Lecture. Born in Jamaica, Cox now lives and works in New York. She has received an award from the New York Foundation for the Arts as well as an Aaron Matalon award at the National Gallery of Jamaica; and has participated in She the Whitney Museum of American Art Independent Studies Program (1992–1993) and had several gallery and museum exhibitions, including the Museum of Modern Art (1993), Whitney Museum of American Art (1993), the Institute of Contemporary Art in Boston (1995), Alrdich Museum (1996), New Museum (1999), Venice Biennial, Smithsonian Accostia Museum and Center for African American History and Culture (2000), Brooklyn Museum (2001) and Studio Harlem Museum (2005 and 2012).

For nearly 30 years Cox has used the photographic medium to explore the contemporary female body. Often using her own image she has taken viewers on a journey through the multiplicity of womanhood as it engages history, class, race, sex and technology within an evolving American society still struggling to reconcile the African-American image beyond a

painful history of discrimination and stereotypes. To this end Cox’s was featured in the documentary film “Through A Lens Darkly” by Thomas Allen Harris (2014), broadcast on PBS (2015). 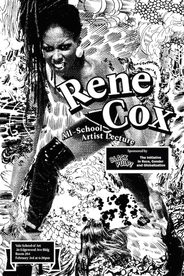 This year saw the complete overhaul of the IRGG website. Working with Yale ITS the online home of IRGG has been remade. The IRGG’s new Internet presence features an updated interface with extensive archives of events and conferences. In addition, videos of the 2013 “Sumak Kawsay” conference are available, a few in translation. Please see: http://irgg.yale.edu/

In 2016-2017 the IRGG will continue to advance its mission of fostering important conversations.

The IRGG thanks all of the administrators, IRGG Affiliates, Yale institutions, and the numerous individuals who were involved at every level of the growing and vital conversation about the links between race, gender, and globalization. We thank everyone and look forward to working and talking more in the years ahead.