Urban Narratives of Injustice: On “The Wire”

Police violence in America has been the subject of criticism around the world. This symposium will examine narratives of injustice, crime and the policing of citizens as represented in The Wire (2002-2008), critically acclaimed as the finest television drama ever made. 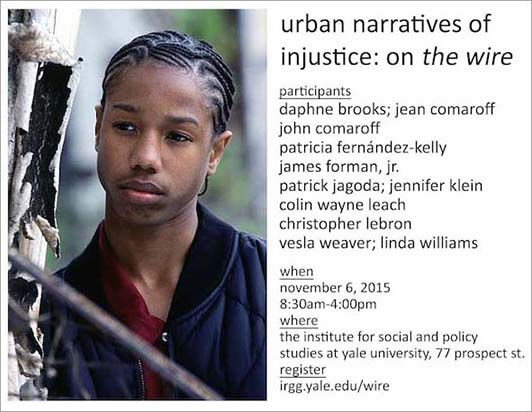 Presentations will consider a number of questions: How does reading The Wire illuminate the sources and experiences of urban decline? The political and moral economy of racial domination? The policy landscape and institutional environment of contemporary American cities? The modes of storytelling that make these issues legible?

In addition, more than a decade after its premiere, scholars are well-positioned to consider The Wire anew, and from some distance: Its reception and “cult” status among both mass and academic audiences; its resonance with contemporary debates around urban and suburban state violence in the United States and abroad; the historical, political, and technological moment that it reflects and documents; and the shifts in strategies and technologies of police surveillance.

Photo Gallery of this event

Contact:
Register for "Urban Narratives of Injustice: A Sympoisum on "The Wire"
yale.irgg@gmail.com